Often known as Gunkanjima or battleship island for its similarity to a Japanese battleship, Hashima is an abandoned island in Nagasaki, Japan.

Hashima Island is a popular destination in Japan for those who love James Bond as it was an inspiration for Skyfall 2012 movie.

How to visit the Gunkanjima battleship island?

Let’s take a look inside Japan’s abandoned battleship island to understand more about it.

The article has the following sections:

The history of Hashima Island (Gunkanjima)

The coal was first discovered on Gunkanjima in 1810, and the full-scale seabed coal mining operations started 80 years later, in 1890, by Mitsubishi Limited Partnership.

The distance from Mitsubishi Mining Company as the main coal mine on the island of Takashima to Hashima island is approximately 2.5 km.

The expansion of Hashima Island (Gunkanjima)

Gunkanjima was initially just a small aqueous rock, but it was expanded due to mining techniques.

The current size of Gunkanjima is three times more than its origin after six times constructing the dams.

Mining the seabed coal reserves of Gunkanjima took the miners to places more than 1000 meters under sea level.

The working condition was terrible, with a temperature of 30 Celsius degrees and 95% humidity. The miners had to work in a dangerous environment with the risk of a gas explosion.

The buildings on Hashima Island (Gunkanjima)

The population in Gunkanjima grew due to the increase in the amount of excavated coal. In 1916, the first apartment building was built on this battleship island.

What buildings are in Gunkanjima?

Besides shops and schools, the island had a cinema and pachinko hall for leisure activities.

There was a shrine on the island as well. On the 3rd of April, every year, celebrations take place to celebrate the Yamagami festival. Nowadays, only a small part of the shrine remains.

Built in 1916, the No.30 apartment, formerly known as “Glover House,” served as housing for the miners on Gunkanjima island.

This one is the oldest 7-story concrete apartment building in Japan.

The remains of Jetty

Although the mine facilities are mostly in ruins, the steps leading to the jetty are still here.

During its peak, Hashima island was home to 5300 people, five times more than Tokyo in the same period.

At first, the electricity was supplied by a generator, but later by the undersea cable from Takashima island from 1918.

Due to its location, Hashima island suffered from large waves, and it got even worse during hurricanes.

However, the Islanders also got used to them and developed the habit of watching high waves from the rooftops.

Why was Hashima island abandoned?

Due to the Energy Revolution, people started to use oil power instead, leading to the decline of coal demand. Therefore, the production of mine reduced along with the island’s population.

The coal mine on Hashima island was closed in January 1974 with the following abandon four months later in April.

The buildings on Gunkanjima island were preserved, becoming ruins that looked from afar. The island looked like a battleship – Gunkan – so the island was later named.

Visit this island, time seems to be stopping, and the surrounding landscape vividly recreates the old days.

After the mine was closed, Gunkanjima was left abandoned for many years until 2009, when Gunkanjima got considered an industrial heritage site in Kyushu island.

You can now visit Gunkanjima island by taking tours from Nagasaki port.

Is the Gunkanjima battleship island safe to visit?

Yes, it’s safe to visit part of Gunkanjima island. However, when visiting Gunkanjima, you should follow safety protocols.

How much does it cost to go to Gunkanjima?

The cost of the Gunkanjima trip includes the boat tour service and battleship island entrance fee.

Besides paying for the boat tour, each visitor has to pay an entrance fee to Hashima island: 300 Yen/adult and 150 Yen/child.

Here is the plan for the two cruises. You can depart either from Nagasaki pier or from Iojima island.

How to book tours to Gunkanjima?

You can book the Gunkanjima tour easily with Klook, a reliable and efficient online travel company. I’ve used Klook for several activities, so I recommend it.

The booking procedure is effortless.

By choosing the date and course, then paying by credit card, you will receive the confirmation through email and get ready for your trip.

Please note that you will receive confirmation of your booking’s availability through your email within two business days.

As we wanted to visit the Nagasaki museum in the morning, we opted for the afternoon tour.

After having lunch at Chinatown, we walked to the port at the meeting time stated in the email.

I was surprised at a line of people waiting for the tour in front of the lounge. We had to fill in some papers about safety protocol and paid extra for the entrance ticket to the island.

We got in the boat around 1:25 pm, and it departed shortly after that.

The ship went through the Venus Wing Bridge, and we could see Takashima Island from a far distance.

We got to cruise around the island and see it from different angles. It was terrific and overwhelming to see the ruins in person.

We finally reached the Dolphin pier in Gunkanjima around 2:50 pm.

Our guide explained lots of details about the buildings and life on the island during the field trip. It was interesting to know that he lived on this island as a kid.

Before the tour, I imagined we could enter the island deeper, but we just got to see a small part of the island for safety reasons.

On Observation area 1, we got to see the coal storage conveyor belt. The coal was transferred to the storage facility via this conveyor belt, and the braces of the belt still survive today.

After 40 minutes, we returned to our ship to get back to Nagasaki.

On our way back, we got a chance to see a documentary about the island. It was interesting to see how life was on the battleship island compared to the field trip that I just had.

And here is Nagasaki harbor.

My thoughts on the tour

I felt like we spent most of the time on the cruise itself, not the island. It would be better if visitors were allowed to enter the buildings; however, I understood that it might be dangerous.

The field trip was quite rushed, especially if you wanted to take lots of pictures and listen to the stories at the same time.

However, it was a fantastic experience that I’ve ever had. Seeing how nature affected man-built architecture through time was priceless.

Places to stay in Nagasaki

I would recommend staying in Nagasaki during your trip because there are many things to do in this prefecture.

You can read reviews and check the availability of accommodation in Nagasaki with Booking.com.

Note: We paid for our trip to Gunkanjima island, and the review above is based on our experience. As we have full rights to these images, it’s strictly prohibited to use them in any circumstance. 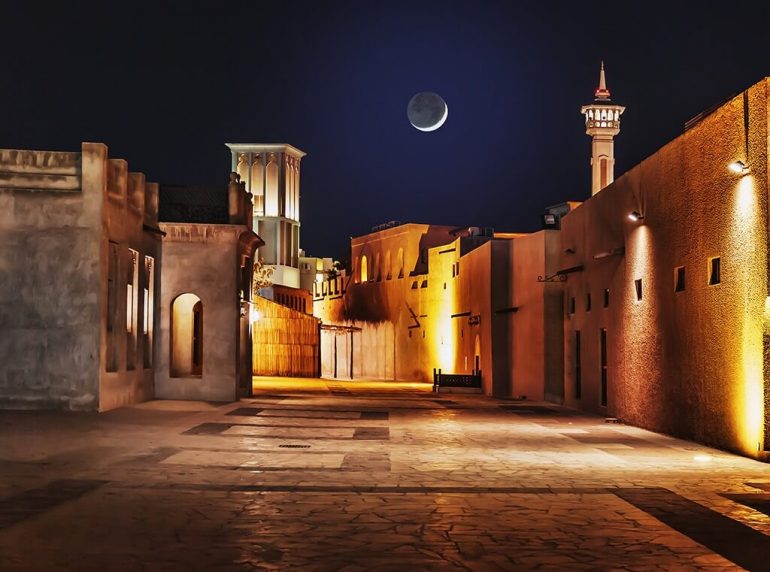 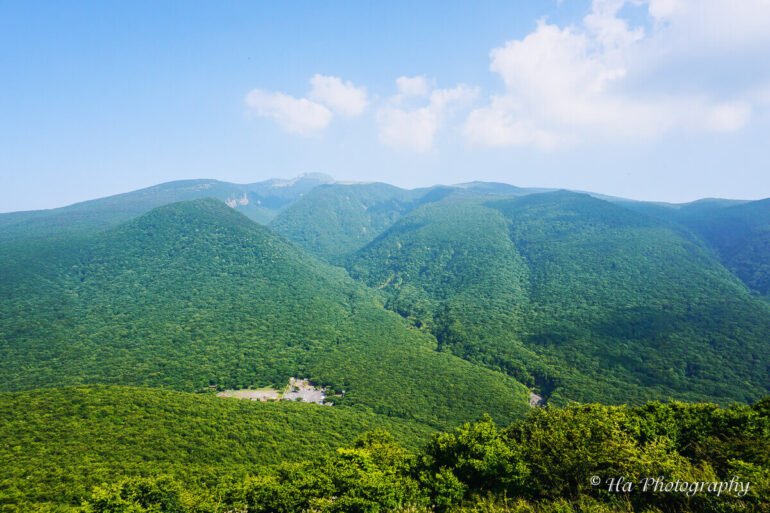 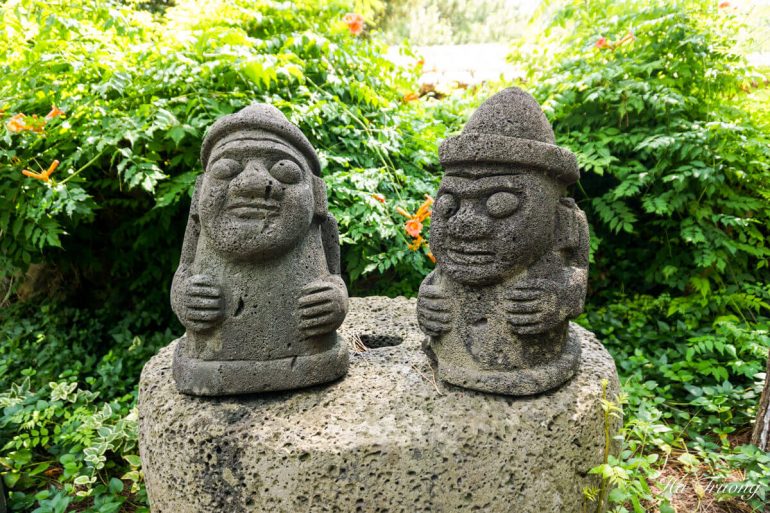 Dubbed as Hawaii of East Asia, Jeju island is a must-stop on your trip to South Korea.  When is the… 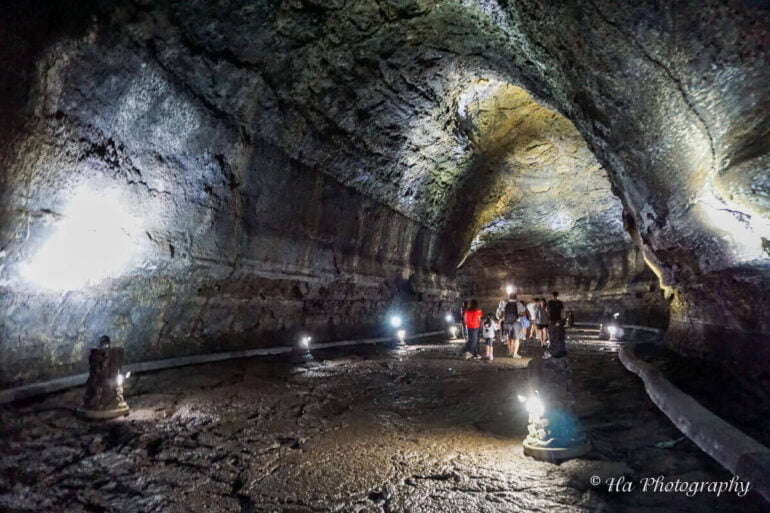 Manjanggul Cave is the 12th longest lava tunnel in the world. This lava tube was formed hundreds of thousands of… 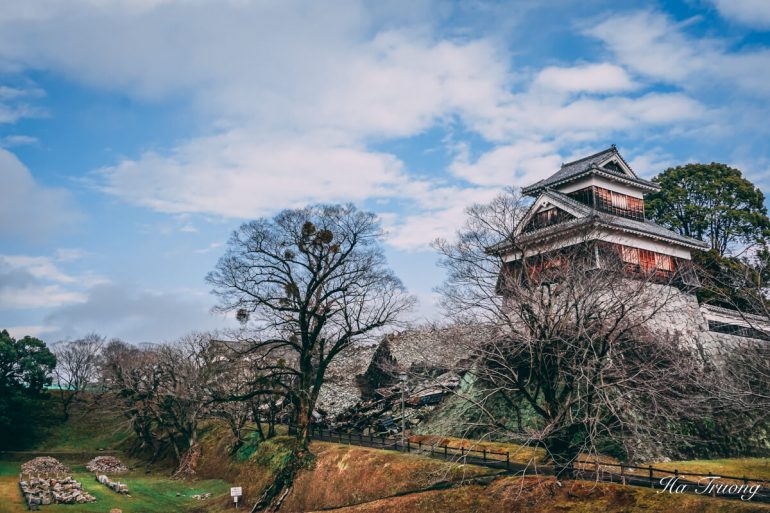 How would a castle look like after an earthquake in Japan? I visited Kumamoto recently to see whether it has…