Located in the North of Nagasaki, Japan, Huis Ten Bosch is a perfect choice for amusement park lovers or those seeking an alternative experience while traveling in Japan.

Here is our complete travel guide to Huis Ten Bosch with transportation information, ticket information, and insider tips to make the most of your visit to this Dutch theme park in one day.

I. What is Huis Ten Bosch?

Located in Sasebo city in Nagasaki, Huis Ten Bosch (ハウステンボス) is one of the unique theme parks in Japan. Huis Ten Bosch is, in fact, the largest park in this country.

With several restaurants located in every corner of the streets, you can enjoy delicious food from all over the world. At night, Huis Ten Bosch is lively with its famous light show.

How much is Huis Ten Bosch ticket/ passport?

For Huis Ten Bosch 1-day Passport, three different packages are depending on the age:

However, you can get a discount by purchasing in advance with Klook.

Huis Ten Bosch ticket price includes the entry ticket to the complex with an admission fee for 50 facilities in the six kingdoms and a one-day bus fee. The price already includes VAT.

a) At the ticket booths

You can buy Huis Ten Bosch tickets at the ticket booths or kiosks to the park. However, there are two reasons why you should not do this:

b) Online via Klook

The best way to buy Huis Ten Bosch tickets online is via Klook, a reliable and efficient online travel company. We’ve used Klook for several activities, so we recommend it.

Here are why you should buy Ba Na Hills tickets online

Please note that every customer has a chance to re-enter the park after exiting the first time. This rule applies to park entrances, except the harbor gate (free zone and charging zone) and west gate.

I would recommend printing and carrying a mobile voucher on your phone for your convenience.

III. How to get to Huis Ten Bosch?

From Hakata station in Fukuoka

You can take a direct train from Hakata station, Fukuoka to Huis Ten Bosch station.

The journey is around 1 hour 40 minutes, and it’s the final stop, so you won’t get lost. Hakata Train Station is large, so make sure that you’re on the right train.

From Nagasaki station, there is a direct train to Huis Ten Bosch station. The train departs every hour.

How to buy a train ticket in Japan

I would recommend purchasing the Japan Rail Pass when traveling in Japan.

The three most common Rail Passes allow you to take rides on most JR railways, local buses, and even the Miyajima Ferry: 7-day, 14-day, and 21-day Japan Rail Pass.

Alternatively, if you’re only traveling around Kyushu, you can purchase the JR Kyushu Rail Pass for this train.

There are two options: 3-day or 5-day JR Kyushu Rail Pass. The 3 or 5 consecutive days Rail Pass will cover unlimited rides in Kyushu, including Shinkansen.

IV. Where to stay in Huis Ten Bosch?

The hotel systems in Huis Ten Bosch are impressive. Various hotels are located in and outside the park, such as Hotel Europe, Hotel Amsterdam, Watermark Hotel Nagasaki, and Hotel Forest Villa.

Also, you can stay at Fukuoka or Sasebo / Nagasaki and make a day trip to Huis Ten Bosch.

V. Things to do in Huis Ten Bosch

You’ll be surprised when visiting Huis Ten Bosch because it doesn’t look like any place in Japan. It brings the feeling of Amsterdam, Netherlands.

Visiting Holland in Japan? Crazy thoughts, right? No one visits Japan and thinks, “Oh, we should take a canal tour and observe the beauty of tulip field.”

Honestly, I didn’t, either. I didn’t imagine that I would visit “Amsterdam” in Japan one day, but I went there, and the trip was great.

1. Get to Huis Ten Bosch station

Huis Ten Bosch station is the final stop for Fukuoka – Huis Ten Bosch, so it’s effortless to get to this theme park. There are toilets in the station, so make sure to use them.

There’s a beautiful bridge that connects the station to Huis Ten Bosch island. Following the bridge, you’ll enter the entrance gate. You can buy tickets there.

2. Take a look around with the Canal Tour

It can’t be Amsterdam without Canal tours.

4. Enjoy the light show at night

At night, you can be blown away by the illumination display. The whole park is lightened up with colorful lights and a parade.

Huis Ten Bosch at night has a magical and romantic atmosphere at that time, so don’t miss out on the night there.

Huis ten Bosch Palace is a royal palace in The Hague in the Netherlands. This Palace was built for Queen Beatrix in 1981, and it was the home of Princess Beatrix until early 2014.

Visitors are required to pay an extra fee to visit this palace. The design is stunning, so it’s worth a visit.

VI. What to eat in Huis Ten Bosch?

There are various restaurants and food stands to choose from. Kyushu island is famous for ramen, so it will be great to have a bowl of hot ramen after a whole day of discovering the area.

Also, Sasebo burger is a must-try food if you visit Nagasaki. This burger is famous in the region, and it’s tasty too!

I hope you will have a nice trip to Huis Ten Bosch! 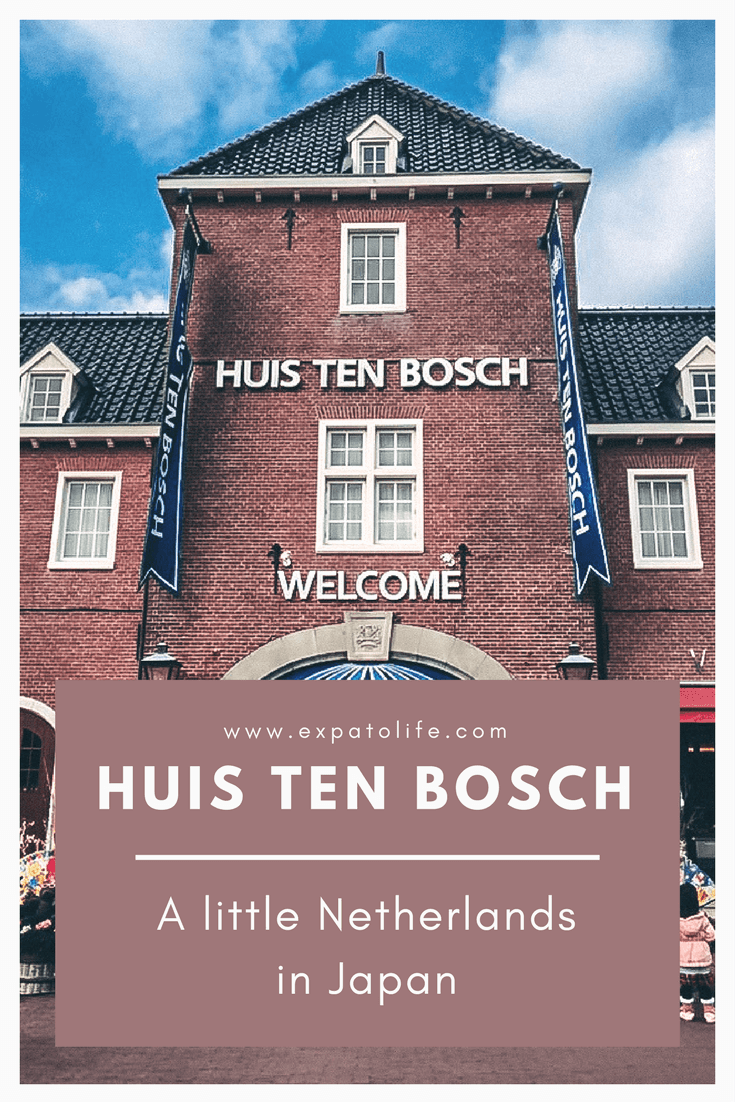