An expat guide to living in Jodhpur, India

What’s it like to live in India as an expat?

In this Expat Interview, Lola shares her expat life in Jodhpur, a town in India. She discusses the cost of living in Jodhpur, the things to do in this city, the difficulties and culture shock that she had.

Jodhpur, India, is a fascinating town located on the edge of the Thar desert in India’s most beautiful state, Rajasthan!

Jodhpur isn’t a part of India’s Golden Triangle or backpacker circuit, so it isn’t visited quite often by foreigners.

There was no choice but to live like a local here, which I fully enjoyed. 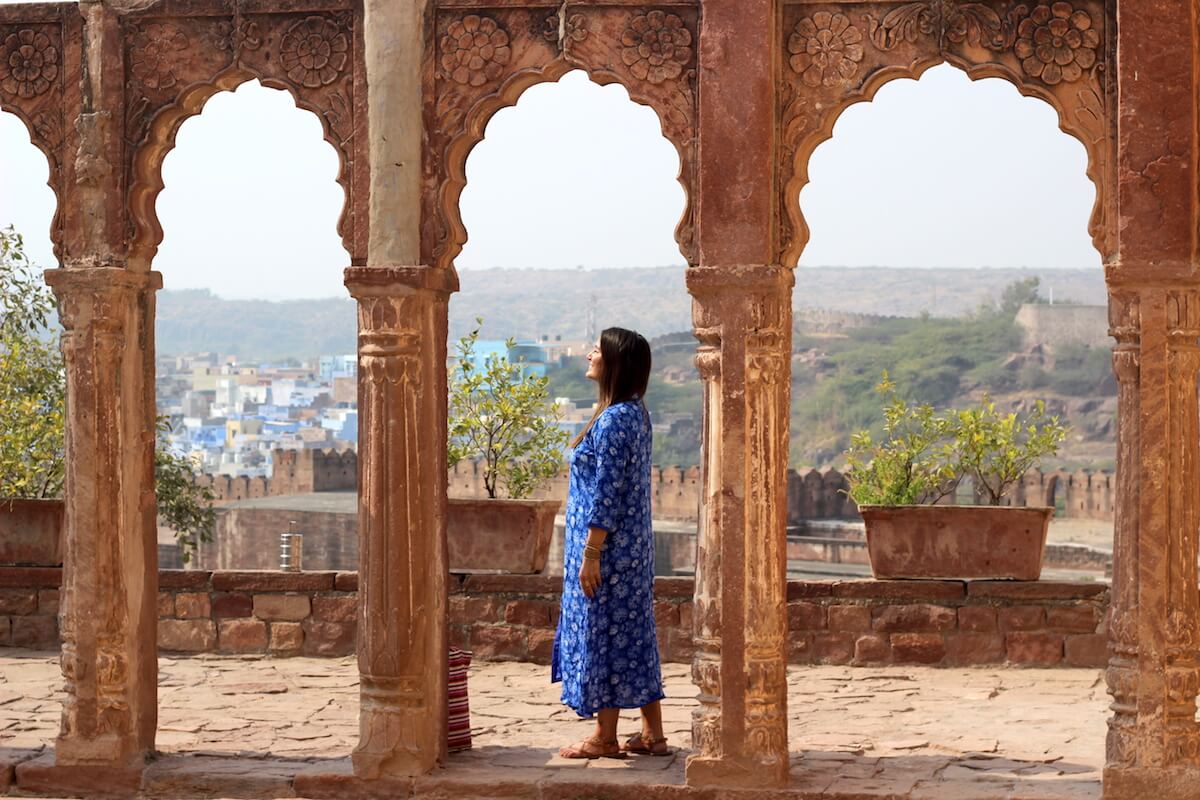 About Lola – An expat in Jodhpur, India

Three years ago, I left the fashion industry in New York City, where I was a senior manager at a strategic branding in pursuit of the unknown out there in our great wide world.

Since then, I’ve explored over 50 countries, staying several weeks or months in each place to get a sense of the local way of life.

I advocate for sustainable travel to become more mainstream and share stories of community-based travel and cultural phenomena on my travel platform. 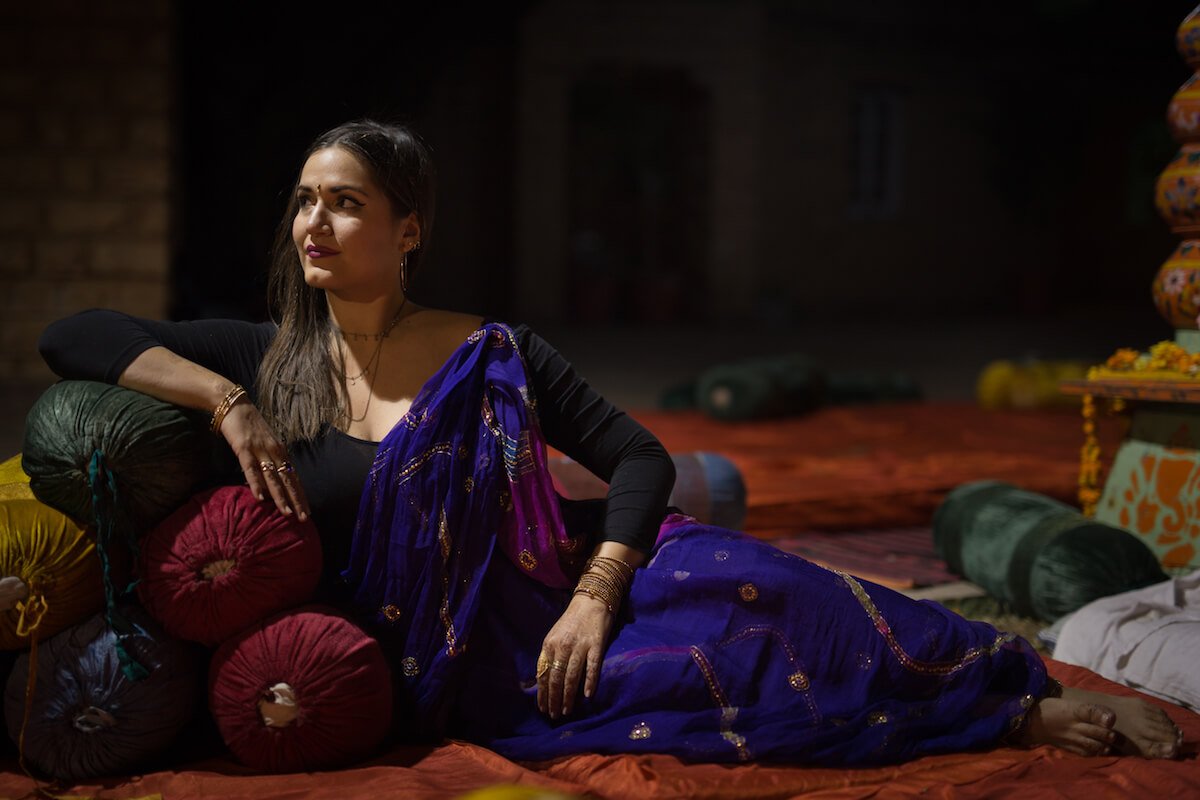 How did you move to Jodhpur?

I lived in Jodhpur from January to March of 2017 and spent another three months traveling all around India.

I just got my 10-year tourist visa, so I will undoubtedly be heading back to mother India soon, where I plan to spend six months in Kochi and six months in Udaipur to start!

I relocated to Jodhpur to work pro-bono with a local women’s empowerment NGO, Sambhali Trust.

Sambhali Trust provides aid and enhances the lives of vulnerable women and children in Rajasthan.

I joined the team as a voluntary communications officer with Sambhali Trust to help spread more awareness about the work they’ve been doing for over a decade.

With my background in the fashion industry, I wanted to work with a charity that’s made measurable results through teaching sewing, embroidery, and other textile skills. Sambhali Trust has seen over 10,000 beneficiaries so far!

How to prepare before moving to Jodhpur?

I had already been traveling full-time for over a year, so I had narrowed down my belongings to one small backpack.

To prepare, I picked up some conservative clothing and gave way all of my leather products.

I had read that leather was very frowned upon, but once I arrived realized no one would have given me any grief for having a leather handbag or shoes.

At the time, I wasn’t vegan yet, but now that I am, it made it easier to have already gotten rid of my animal skin products.

I also shouldn’t have bothered picking up conservative clothing in Europe as it was important that I wear traditional clothes while in Jodhpur to blend end and show respect.

Also, clothing in India is incredibly inexpensive and low quality. So it was fun and cheap to shop for local things and play with colors I’d usually avoid wearing while I was in Jodhpur.

The only clothes that I bought in India that survived my trip were a few handmade kurtas and vintage sari’s, which were well worth the investment.

Otherwise, I’m sure there are some shots that some medicinal professionals would suggest you get, but I didn’t bother with any of that.

I’m a big believer in using the tried and true remedy for illness when you’re overseas-stock up on activated charcoal pills for the dreaded Delhi belly.

Do get health insurance with extensive coverage–you never know what could happen anywhere in the world. Still, in India, you’ll run into crazy situations like tuk-tuk accidents and cows that literally knock you over.

How to deal with difficulties when moving to India?

It takes time to get used to the constant staring from men. For the most part, the harassment was limited to disturbing looks.

Oddly enough, it was women who would pass by me and graze my skin. I had to constantly explain to people that I was not White and am also a minority, but even though my skin was darker than most locals, I was often called a White person.

There is a certain stigma about foreigners being incredibly wealthy. 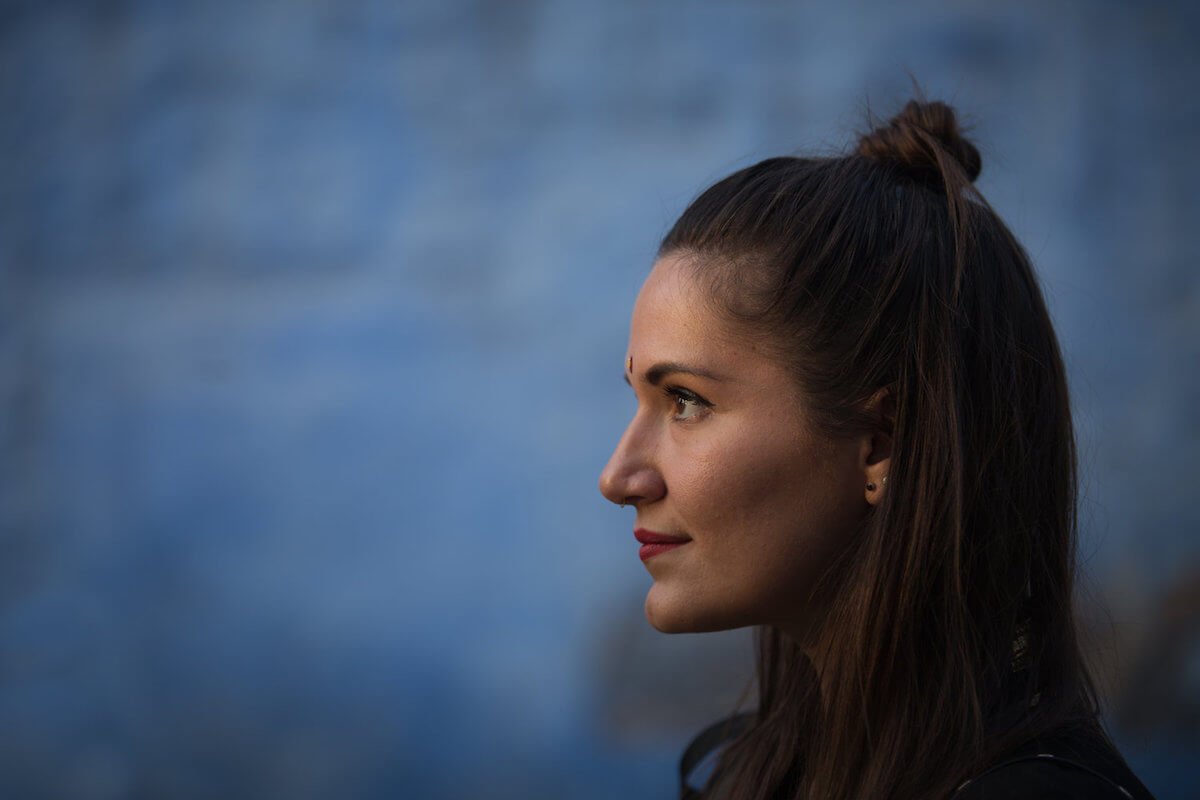 Haggle for local prices. Otherwise, you tilt the local economy and market.

It took me less than a week to realize the fair price for clothing, produce, transportation, and the local terms to haggle over it all.

How to overcome culture shock in India?

If anyone from the west goes to India and doesn’t have some culture shock, I’d find that shocking.

It’s very difficult to see so many people living in extreme poverty, especially the young children who beg in the city center.

I’d buy them dinner almost nightly but never give them any rupees.

In India, death isn’t feared. It’s something people look forward to and celebrate, as they believe in reincarnation.

It was shocking to see people who seemed on the brink of death simply sitting on the ground and waiting to go.

Sometimes you’ll see dead bodies being carried through the streets wrapped in colorful cloth with a loud procession on their way to be cremated publicly. This is just the Hindu way of life in India.

I expected to deal with a lot more sadness and depression when meeting with the female beneficiaries of Sambhali Trust.

Many of these women have been through unimaginable circumstances of abuse, neglect, and suppression.

Yet somehow, every one of them burns an interior light that glows through them and shows their resilience, hope, and love.

These women are reclaiming their lives, their rights, and their future. They inspired me beyond measure and touched my life in a more meaningful way than I could ever hope to touch theirs.

Jodhpur is a real-deal India.

You won’t find a Starbucks here full of digital nomads, but you can work at any of these awesome Jodhpur cafes serving great coffee.

So many of the comforts I was used to are simply not available in Jodhpur, and that’s what made a living there so beautiful.

I had to be patient and go with the flow–things that don’t come naturally to me at all. Also, I grew exponentially there, mainly due to the lack of modern influence. 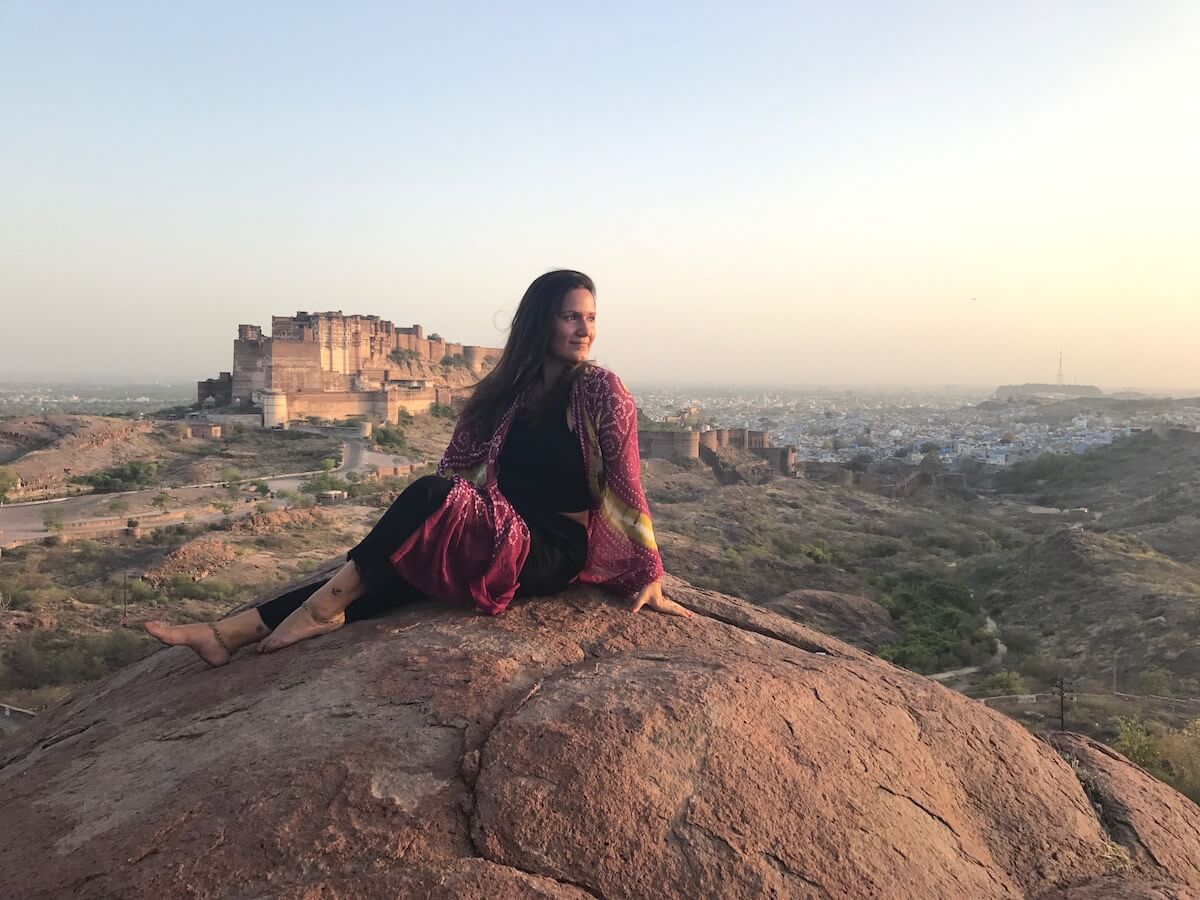 I adapted to a foreign lifestyle and grew to enjoy day trips to the local farmer’s market for produce, communicating with locals in my minimal Hindi, and feeling beautiful in traditional Indian clothing.

Traffic in the city center is crazy between wild motorbike drivers, tuk-tuks, and aggressive cows. Oh, and the occasional elephant and camel stomp through town.

I lived in NYC for seven years before I started traveling so I could deal with the chaos, but on top of everything else that can be overwhelming in India, there were some days I just couldn’t be bothered to leave the quiet guesthouse where I was living and where the NGO was based.

What are your favorite things to do in Jodhpur?

Jodhpur has many historical treasures to be discovered, but many travelers only spend a day or two in the city and miss some of the most beautiful sites.

The most popular sites to see are the Mehrangarh Fort and the old city, which is the part of the town painted blue. 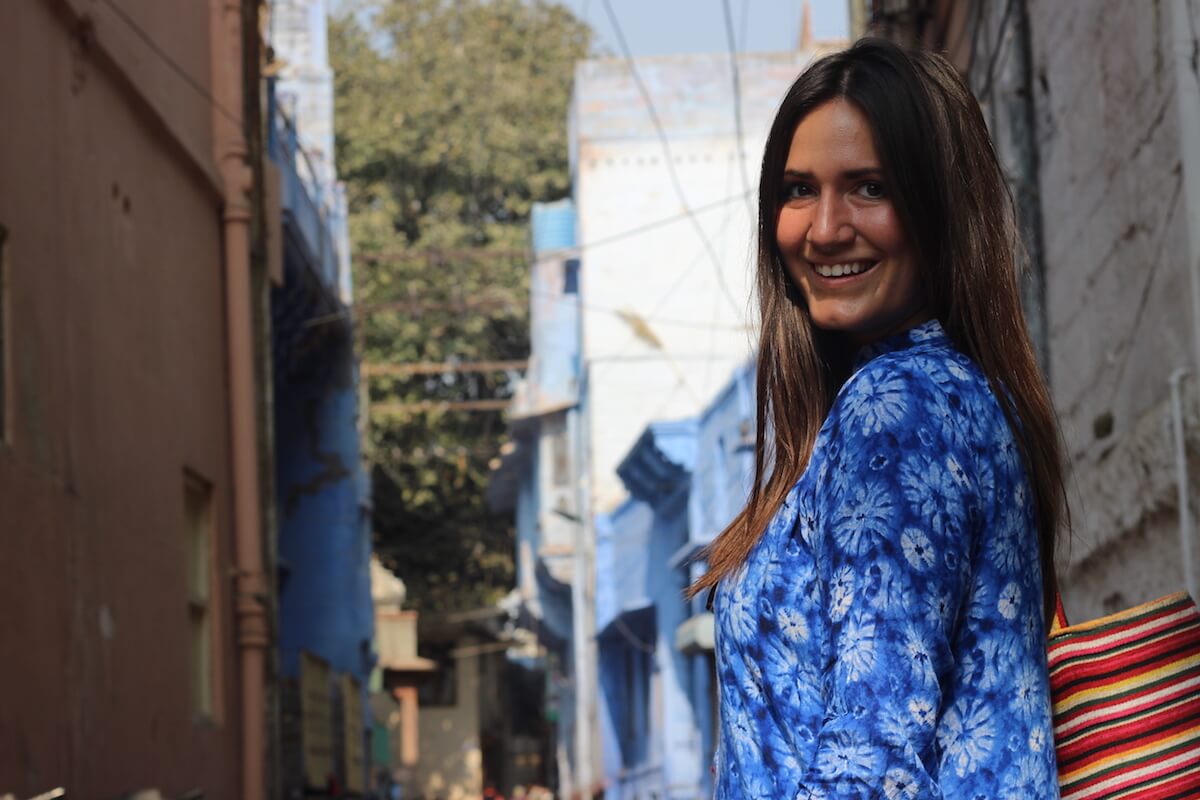 Cost of living in Jodhpur

Life in Jodhpur is seriously affordable for foreigners. For room and board, I paid about $215, which was on the higher end of costs.

An expat guide to living in Beppu, Japan

3GB of monthly data through Vodafone is $15 and can be used as a hotspot for my computer when WiFi went out.

Transportation is usually less than $1 each way, and a kilo of mangos never costs more than $1.

Is it easy to make new friends in Jodhpur?

I only ever saw a handful of tourists in the city center, and all of the foreigners I met were volunteering with the Sambhali Trust.

I didn’t have a lot of time to socialize and was in a long-distance relationship at the time and sober, so I didn’t actively seek out new friends while I was in Jodhpur.

I hung out mostly with fellow volunteers who were foreigners, as we were told repeatedly by the NGO founder that we were not allowed to have local friends.

I did meet some wonderful locals, including women who were impacted by the charity, a trio of young Indian national guys that own my favorite hostel in Jodhpur (Bedpool), and my tattoo artists who gave me six tattoos during my time there, two of which honor my time in Jodhpur.

Namaste Cafe near the clock tower was my favorite spot to work for the day with a beautiful view and delicious, affordable food.

A memorable experience in Jodhpur

Although she’s received death threats during previous trips to her native India, she chose to come to Jodhpur to screen her film The Anatomy of Violence to Sambhali Trust beneficiaries and speak to the women about overcoming the sexual assault. What an incredible woman!

I also got to go to an Indian wedding, which was too much fun–the food, dancing, clothing, and love lasted until the early hours of the morning for three days straight! I’m still recovering a year later!

Did you change your perspective about Jodhpur after living here?

I didn’t have any expectations of the city going into it. Overall my perspective of India changed greatly from spending six months there.

I was pleasantly surprised to see that most women in India wear saris! I’m enamored with textiles and was thrilled to see that this clothing custom has lasted the test of time.

What are your advice and tips for living in India?

Try to learn as much Hindi as possible before you arrive.

Some Indian people in Jodhpur speak English, but most of the people you encounter will only speak Hindi.

If you’re going to live somewhere for an extended period, it’s always best to learn as much of the local language as possible so that you can communicate and show respect to your adopted home. 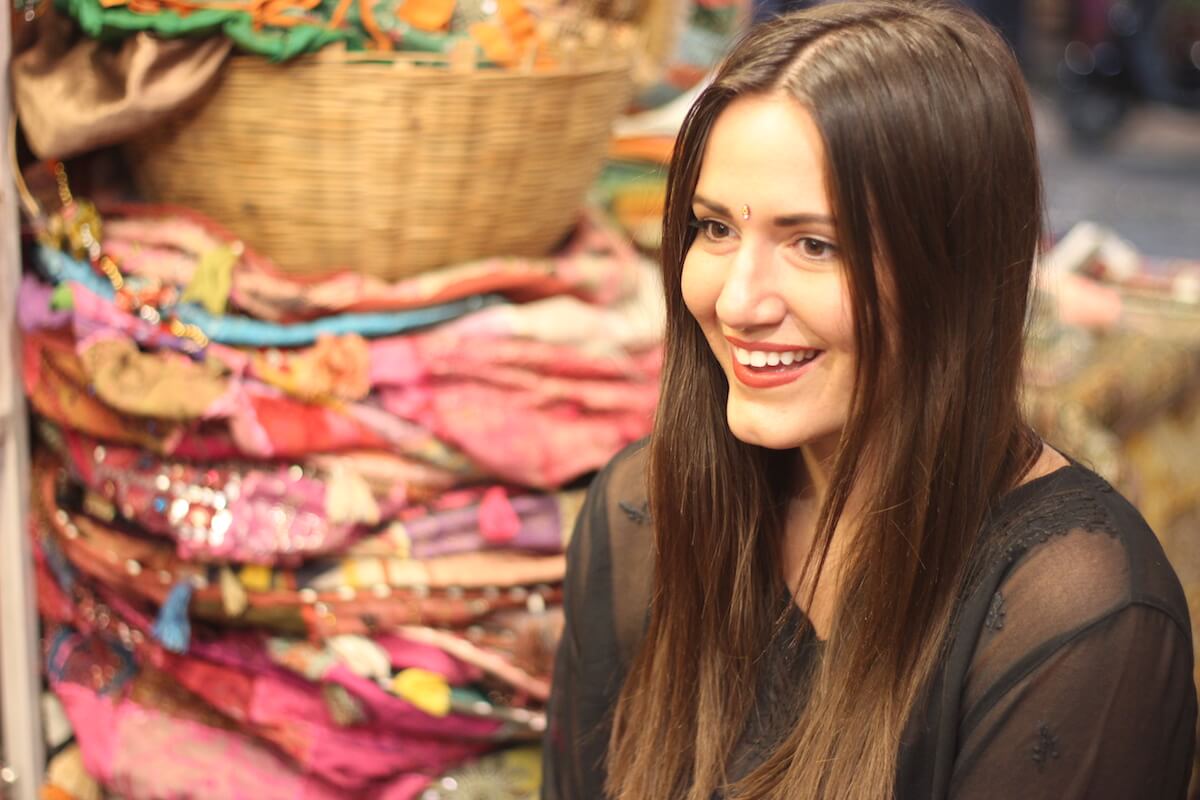 Would you recommend others to live in Jodhpur?

Although it isn’t a very common city for expats, and there’s a lack of infrastructure and western ideals, I’d absolutely recommend Jodhpur to those who are eager to experience India authentically.

It’s a wonderful place to either volunteer for a few months or base yourself for a season as a digital nomad.

I’d urge foreigners not to accept jobs in the hospitality industry as they’d be taking the job away from a qualified local.

I honestly cannot even remember who I was before I started living abroad three years ago!

I’ve become so much more aware of the impacts of my lifestyle, which is why I’m a dedicated, responsible traveler and plant-based eater.

Lola Méndez is a travel writer and full-time globetrotter sharing her adventures with Miss Filatelista.

She travels to develop her own worldview and has explored over 50 countries. Passionate about sustainable travel, she seeks out ethical experiences that benefit local communities.

Disclaimer: The photos used in this interview belong to Lola Méndez.